The Battle of Berlin was the last major World War II battle in the European Theater of Operations. It was fought between the depleted German forces and the Red Army from April 16, 1945, to May 2, 1945, in Berlin, Germany. It was one of the bloodiest battles in history as approximately 350,000 men on both sides were killed and the capital of Germany lay in ruins. It was also the second, most fiercely fought urban military encounter right after the Battle of Stalingrad.

After a four-day battle at the Seelow Heights, from April 16 to April 19, 1945, the Soviet forces of the 1st Belorussian Front, under Zhukov, were able to cross the Oder River and head towards Berlin. Meanwhile the Red Army's 2nd Belorussian Front, under the command of General Konstantin Rokossovsky, had breached the German lines in Pomerania, on February 24, 1945, rapidly advancing westward as fast as 25 kilometers a day, through Pomerania and Western Prussia, temporarily halting on a line 60 kilometers east of Berlin along the Oder River.


Map Battle of the Oder or Seelow Heights 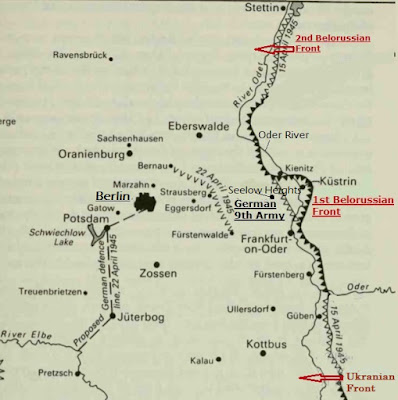 The first German defensive preparations to protect Berlin had begun on March 20, when the newly appointed commander of the Army Group Vistula, General Gotthard Heinrici, correctly anticipated that the main Soviet thrust would be made over the Oder River. Before the main battle in Berlin was initiated, the Soviets had managed to encircle the city after the fierce battles of the Seelow Heights and Halbe.

The Battle of Berlin began on April 16, 1945, when two Soviet fronts (army groups), the 2nd Belorussian Front, and the 1st Belorussian Front of Georgy Zhukov, attacked Berlin from the east and south, while a third overran the German units deployed north of Berlin. Before the attack, the 1st Belorussian Front led by Marshal Georgy Zhukov had shelled Berlin's city center, while Marshal Ivan Konev's 1st Ukrainian Front had pushed north from the south through the last formations of Army Group Center, facing the decimated elements of 4th Panzer Army.

The German defenses were mainly led by Helmuth Weidling and consisted of several depleted, badly equipped, and disorganized Wehrmacht and Waffen-SS divisions, as well as many Volkssturm and Hitler Youth members. Within the next days, the Soviets advanced through the city, suffering heavy losses as they slowly made their way through the city rubble amidst a dense rain of German bullets and mortar shells. Having reached the city center, the Soviet units conquered the Reichstag on April 30, after ferocious fighting.

During the early hours morning of April 30, General Helmuth Otto Weidling, on Hitler's authorization, attempted a breakout through the encircling Red Army lines, but the counter-attack war short-lived and ground to a halt. That afternoon, Hitler and Braun committed suicide and their bodies were cremated not far from their bunker. In accordance to Hitler's last will and testament, Admiral Karl Dönitz became the "President of Germany" (Reichspräsident) in the new Flensburg government, and Joseph Goebbels became the new Chancellor of Germany (Reichskanzler).

Before the battle was over, many of Adolf Hitler's followers committed suicide, too. The city's defenders finally surrendered on May 2. Nevertheless, Waffen-SS units kept fighting tenaciously to the north west, west and south-west of the city until the end of the war in Europe on May 8. More German units fought westward so that they could surrender to the Western Allies rather than to the Soviets.
Map of Battle of Berlin 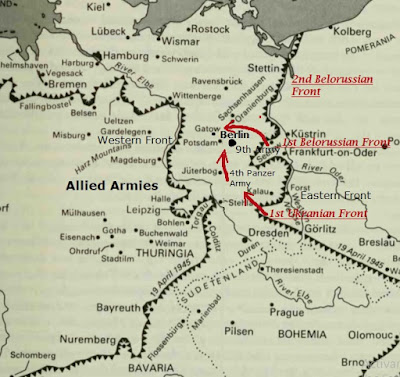 Battle of Berlin fighting (original footage)
By Carl B Spinner at May 24, 2020