The Battle of Stalingrad was a crucial military encounter savagely fought between the German 6th Army and the Soviet 62nd and 64th Army. It took place in the city of Stalingrad (Volgograd) and its surrounding area, on the Volga River, in southwest Russia, from August 23, 1942, to February 2, 1943, during World War II. Along with the Battle of Berlin, it was the biggest urban military engagement of that war, with the infantry soldier fighting street by street and house-to-house for the control of the city. As the Wehrmacht forces got trapped and annihilated by the Red Army and the Russian winter, it was a pivotal military event, with the Soviet victory turning the tide of the war on the Eastern Front as it was the beginning of the end of the Third Reich.

Prior and causative events

Operation Barbarossa had ground to a halt, with Army Group Center not being able to take Moscow in December 1941 as their forces were thrown back by a short-lived Russian counteroffensive. After heavy combats, the front line finally got stabilized about 150 km west of the capital of the Soviet Union in February 1942. In April, 1942, however, Adolf Hitler and his Generals decided to postpone the capture of Moscow and came up with a new military offensive plan to secure the vast oil fields of the Caucasus in the south; that new military plan was called Case Blue (Fall Blau in German).

To carry out the military campaign in the Caucasus, Hitler had divided Army Group South into two smaller battle units: Army Group A and Army Group B. Under the command of field marshal Wilhelm List, Army Group A had been assigned the task of conquering and securing the Caucasus oil fields; thus, they had to cross the Don River and advance southwards. Meanwhile, Army Group B, led by General Maximilian von Weichs, had been ordered to thrust eastwards, towards the Volga River, in the direction of Stalingrad, to protect the rear and left flank of the forces carrying out the Caucasus campaign. 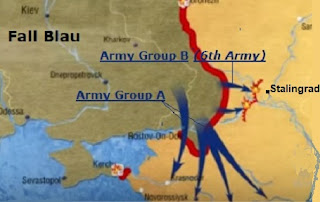 Summary of the battle

Having captured Voronezh and driven the Soviet forces back across the Don River, the 4th Panzer Army and 6th Army arrived at the gate of Stalingrad on August 23, 1942. But it was the latter which had the martial job of taking the city, which was deemed of strategic importance because it lay on the Volga and that river was the main means of communication and transportation between the oil fields of the Caucasus and other Russian cities.

With the air support of Junkers Ju 87 Stuka dive bombers from the Luftwaffe air unit 4 (Luftflotte 4), the German 6th Army's divisions began slowly to close in on the city. But von Paulus had procrastinated and had not ordered his divisions commanders on time to close the pincers upper jaw on the north to encircle Chuikov's 62nd Army and some 64th Army units before they got into the city, with the 4th Panzer Army being the southern jaw. Thus, these Soviet Armies escaped the German encirclement and poured into Stalingrad where they hid among the rubble and empty buildings and waited for the Germans to come in.

There, the Russian soldiers of the 62nd Army would put up stiff resistance, fighting in a house-to-house and door-to-door battle for the control of a city block. Hence, each building would become a combat scene, like the battle of the tractor factory and the savage engagement of the wheat elevator. Thus, the whole German 6th Army, and some elements of the 4th Panzer Army would get bogged down in a gory nightmare they could not wake up from. 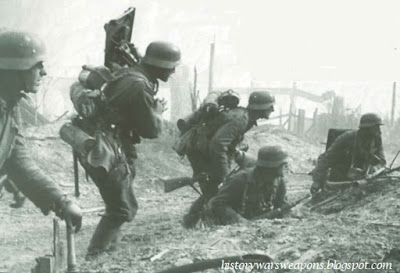 Although the Germans had conquered 80% of Stalingrad by late September, they could not fully control the city, for the Soviet 62nd Army units were constantly being resupplied from the other side of the Volga River with ammunition and men. By late November, 1942, the onset of the Russian winter, food shortages, and the Red Army's Operation Uranus had sealed the fate of the German 6th Army.

By mid December, Friedrich von Paulus' plan for pulling back out of Stalingrad and escape the Soviet encirclement of Operation Uranus had been rejected by Adolf Hitler, who told him to keep fighting to the last man. To no avail, the Luftwaffe's cargo aircraft tried to supply the trapped men of the German 6th Army and Romanian 3rd Army. Thus, the German infantry soldiers kept fighting under extreme weather conditions, with temperatures of -45 degrees Celsius. Malnourished, many fell ill and froze. Surrounded from all sides by the Soviet 5th Tank Army and the 51st and 57th Army (Stalingrad Front), von Paulus surrendered to the commander of Operation Uranus, General Georgy Zhukov, on February 2, 1943.

Map of Stalingrad in mid November, 1942 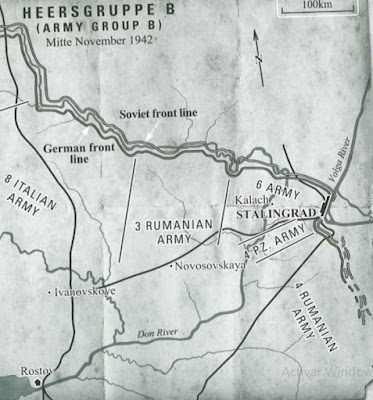 Below, German infantry soldiers provide machine gun fire support to their advancing comrades on the outskirts of Stalingrad in late August, 1942 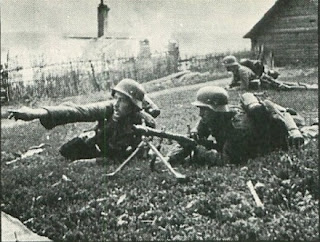 Battle of Stalingrad footage
By Carl B Spinner at May 22, 2020