The German invasion of France in World War II is known in military history as the Battle of France. It took place from May 10 to June 25, 1940, in France, Holland, and Belgium. Just as the German Polish Campaign, which had been accomplished the year before, it was carried out quickly and efficiently, using the new lightning war tactics, where the German Army's armored divisions and the Luftwaffe dive bombers played a key role to achieve a total victory. These German powerful military units invaded and conquered France through two military operations; Fall Gelb (Case Yellow) and Fall Rot (Case Red).

Approved by Adolf Hitler on February 17, 1940, Fall Gelb called for a main and powerful invasion thrust into French territory through the Ardennes forests (southern Belgium and Northeastern France), fording the Meuse River at Sedan, with a secondary diversionary military attack carried out through Holland and Belgium to lure and engage most of the British and French forces, while the main German invasion force would advance through the Ardennes. It had been devised by General Franz Halder and Erich von Manstein, with the former making the initial plan, and the latter modifying the original invasion plan; this is the reason it is also known as the Manstein's Plan. Fall Gelb would be set in motion on May 10, with the diversionary attack on Holland and Belgium.

This military plan was the German invasion of France through and bypassing the Maginot Line, which was the French fortified line of defense along the German border. It was the second stage of the conquest of France as it began on June 5, 1940.

To attack France, the Wehrmacht organized the invading force into three Army Groups; Army Group A (under Gerd von Rundstedt) was made up of the 4th Army (Günther von Kluge), the 12th Army (Wilhelm List), and the 16th Army (Ernst Busch), totaling 45 divisions, which included 7 armored and 3 motorized; Army Group B (Fedor von Bock) was composed of the 18th Army (Georg von Küchler) and the 6th Army (Walter von Reichenau), amounting to 29 divisions, with 3 armored and 2 motorized; meanwhile Army Group C (led by Wilhelm von Leeb) was formed by the 1st and 7th Army, with 18 divisions. The total German ground troops amounted to 3 million men.

Rundstedt's AGA would carry out Fall Gelb's main offensive through the Ardennes forests, while AGB would accomplish the diversionary attack in the north through Holland and Belgium. Meanwhile, south of the Ardennes, von Leeb's AGC would execute Fall Rot, attacking France through the Maginot Line.

Map of the Battle of France, showing the directions of the German thrusts into Dutch, Belgian, and French territory and the defensive positions of the Allied forces 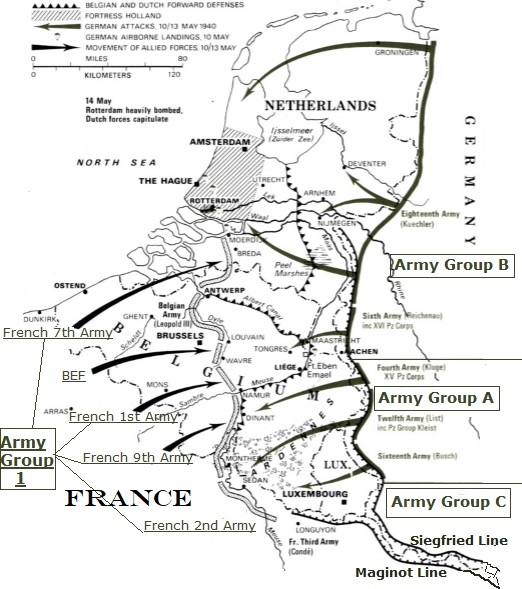 Preceded by Luftwaffe's air raids against Dutch and Belgian military installations and communication facilities, the Battle of France was set in motion on May 10, 1940, when AGB's German paratroopers from the 7th airborne division landed deep in Belgian territory, seizing key Belgian bridges on the Albert Canal and destroying the Eben Emael fortresses, thus clearing the way for AGB's ground units, which were already pouring into Belgium and Holland. German airborne troops also captured the Hague in Holland on the same day. On May 14, Rotterdam was heavily bombed by the Luftwaffe aircraft, forcing the Dutch government to surrender, while spearhead elements of AGB's 18th Army poured deep into Holland, taking towns, bridges and airports, forcing the French 7th Army to fall back into Belgium. 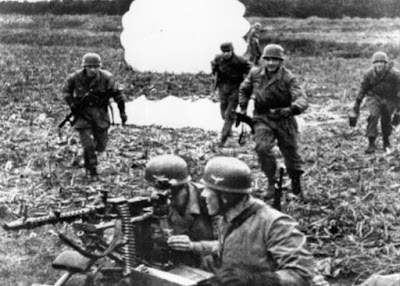 Further south, in the Ardennes forests, spearhead armored units of AGA's 12th Army, under Heinz Guderian, pushed westwards, bypassing Sedan and crossing the Meuse River on May 13 as they made their way deep into French territory, while 4th Army's elements took Dinant and got across the same river. On May 14, many Allied infantry units of the French 9th and 2nd Army began retreating in disarray. Guderian's XIX Corps's armored units advance was relentless, especially Rommel's 7th Armored Division, and by May 18 these German armored divisions had captured St Quintin and Cambrai, while von Reichenau's 6th Army had already taken Brussels in Belgium.

Bypassing Paris, the AGA's armored and mechanized infantry units continued their advance westwards. Then, on May 21, they swerved north, reaching the French port of Calais, constituting the southern jaw of the Wehrmacht pincers that encircled the French 1st Army, the British Expeditionary Force, and the Belgian Army. These Allied troops had only one way out, the French North Sea coast at Dunkirk. The German AGB's divisions formed the northern jaw of the pincers. Thus, thousands of Allied troops were routed as they retreated to the beaches of Dunkirk where they were strafed and bombed by Luftwaffe ground attack aircraft. Then the British Royal Navy initiated Operation Dynamo, which was the evacuation of British and French troops across the Channel from continental Europe onto the British Isles. This was possible due to a miscalculation of Gerd von Rundstedt, the commander of Army Group A, who had ordered the German armored divisions to stop.


Below, Map of the invasion of France after the defeat of the French Army Group I and the BEF 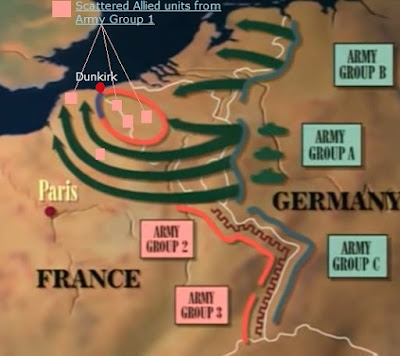 While the surviving BEF and French Army units were being evacuated from Dunkirk, the German Army Group B's units swung south, moving towards Paris. The Wehrmacht 18th Army's infantry divisions poured into the French capital on June 14 as the French war cabinet appointed Marshal Henri Philippe Petain Prime Minister of France, who surrendered and signed the Armistice with Germany on June 22, 1940, on the same railway coach on which World War I armistice had been signed on November 11, 1918. It was Germany's revenge.

Below, a German 18th Army's infantry regiment parading in Paris 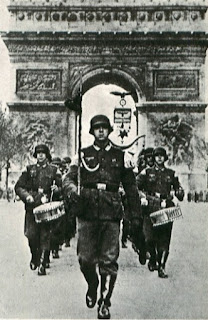