Second Battle of the Aisne (summary)

The World War I Second Battle of the Aisne broke out on April 16, 1917, with an intense and concentrated French attack on the German positions on the Chemin des Dames ridge, located between Soissons and Reims, about a 140 km northeast of Paris, using 19 divisions, while the British carried out diversionary attacks near Arras. However, this Allied offensive ground to a halt on May 9, as their forces failed to achieve their objectives, one of which was to capture and secure that ridge.

This 80km-wide frontal offensive had been conceived by the French commander-in-chief General Robert G Nivelle, who had also planned to push north to take the German-held city of Laon once the ridge had been captured. However, Nivelle's plans had leaked and the German High Command was prepared for the attack, waiting for the French with reinforced fortifications along their lines, bristling with high caliber guns and machine gun nests.

On the first day, the French offensive was stopped dead with an overwhelming volume of German artillery and automatic weapons fire. On April 17 and the days that followed, the French hung on to their plans as wave after wave of French infantry charged up the slope which was heavily defended by the German 7th Army's troops, under General Max von Boehn. These French attacks were so useless and costly, with thousands of French being mowed down by machine gun fire, that mutiny broke out among the French troops.

Despite the stubborn commitment of the French generals and the unrelenting assaults on the German positions, only small territorial gains had been made by May 5, capturing just a couple of miles of the Chamin des Dames ridge. By May 9, the offensive had been called off. As a result of this failed military offensive, General Robert Nivelle was forced to resign, being replaced by Philippe Petain, who would manage to finally take the ridge in late October in another costly frontal assault. The French had suffered almost 190,000 casualties.

Below, photo of German observers in forward position on the Chemin des Dames ridge 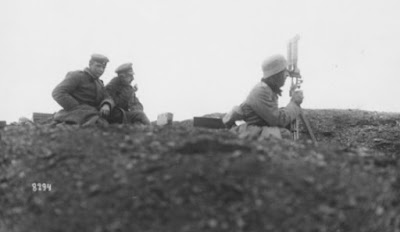