The only resemblance between the M26 Pershing and the T-34 is that they were both fielded against a common enemy in the same armed conflict; World War II. They were also used in the Korean War but this time employed by opposing forces. The American tank was introduced at the beginning of 1945 and it did not see much action; however the Soviet T-34 entered service by mid 1941 and was used in combat in December 1941, during the battle of Moscow. From a technical point of view, the difference lay in weight, armament, type of engine, and armor.

With a weight of 42 metric tonnes, the Pershing can be classified as a heavy tank, while the Russian one was a medium tank, weighing 26 tonnes. The American armored vehicle was powered by an 8-cylinder, gasoline engine, delivering 500 HP, while the T-34 was driven by a 12-cylinder "V" diesel engine, which also yielded 500 HP, but since the Soviet tank was lighter, it ran faster than the M26, at 55 km/h, while the Pershing maximum speed was 40 km/h. The Russian tank also had a much longer operational range.

This is where the Pershing has a big advantage over the T-34. The US Army tank was fitted with a powerful 90mm-caliber gun, which could knock a Panzer VI, Tiger, out of action from a distance of 900 meters, and the Soviet tank from 2,000 meters. On the other hand, the T-34 was armed with a 76 mm gun, which implied that it had to get much closer to a Pershing (800 m) to put it out of action.

The M26 Pershing was protected by a 102-mm frontal armor (on the hull). The T-34 was shielded by only a 47-mm-thick armor, which could easily be pierced by the American 90-mm gun ammunition and the German 8.8-cm KwK L56 gun from a distance of 2,000 meters. However, the T-34 was a reliable tank because of its engine and track wheels suspension and track assembly mechanic.

Below, a photo of an M26 Pershing 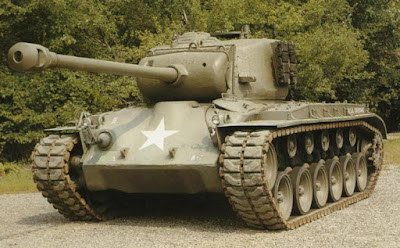 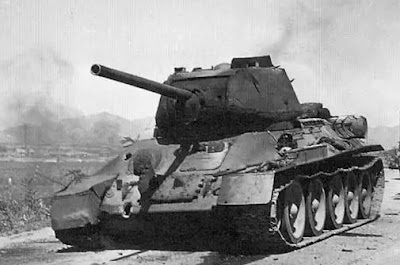